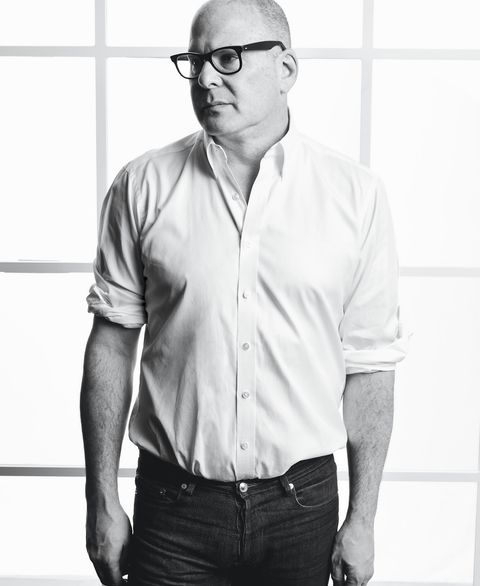 Above: Reed Krakoff, chief artistic officer, Tiffany & Co.
When passing by Tiffany’s in Scottsdale Fashion Square you’ll notice window displays of everyday items redesigned in the iconic “Tiffany blue,” jewelry modeled by stars such as Lady Gaga and Elle Fanning and versions from the newest collection, Paper Flowers, which unexpectedly pair diamonds with mirror-polished pieces of platinum. For these updates, we tip our hat to Reed Krakoff.  Just 18 months on the job as chief artistic officer, the former creative director of Coach and eponymous fashion line, is reinterpreting Tiffany’s distinguished tradition to reflect modern sensibilities. 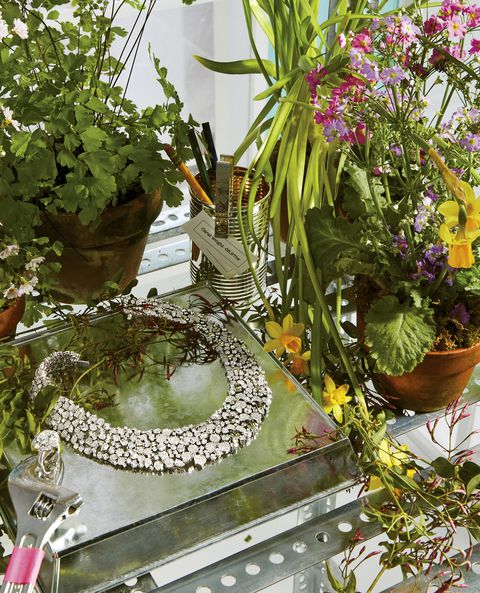 Above: Tin can, clothespin, necklace, and ring, Tiffany & Co.

To learn more about Krakoff, we turn to Holly Brubach’s in depth article, Garden State: Reed Krakoff’s First Collection for Tiffany & Co., published in Harper’s Bazaar on May 2, 2018.

On Reed Krakoff’s first day on the job as Tiffany & Co’s chief artistic officer in February 2017, he was given coffee in a paper cup the color of the store’s signature blue box, with the company’s name in black on the front. He loved it, took a picture of it. There was “this utilitarian thing,” he recalls, “that was somehow romantic, being Tiffany Blue—perfectly useful but not plain.” Now, a year later, Tiffany is selling a bone china version of that paper cup—same shape, same blue, the name in black—along with silver plates crimped like standard-issue paper ones.

He sees these as current examples of the irreverence and wit that inform some of his favorite products from the archives, like the sterling silver pillbox in the shape of a Chinese takeout container that Tiffany first sold back in the 1980s. The new objects are in many ways emblematic of Krakoff’s philosophy of “everyday luxury,” Tiffany items that are intended to be used and worn on a daily basis, as opposed to precious objects to be reserved for special occasions.

Sitting in a library down the hall from his office at the 181-year-old company’s Manhattan headquarters, in a building facing Madison Square Park, Krakoff is doing one of the things he does best: talking about luxury. Tall with close-cut salt-and-pepper hair, he is dressed in his workweek uniform of jeans, a Turnbull & Asser shirt—today’s is a navy-and-white gingham check—and black oxfords, no socks. Black eyeglasses give him the slightly bookish air of a design nerd, an impression reinforced by the many references to objects, furniture, fashion, films, and paintings he weaves into the conversation. He speaks softly, in a low voice, and quickly, as if he were propelled by his ideas. “I was determined not to make it formal,” Krakoff says of Paper Flowers, his first high jewelry collection for Tiffany. “This has become a mantra of mine, the idea that formality doesn’t equal luxury.” 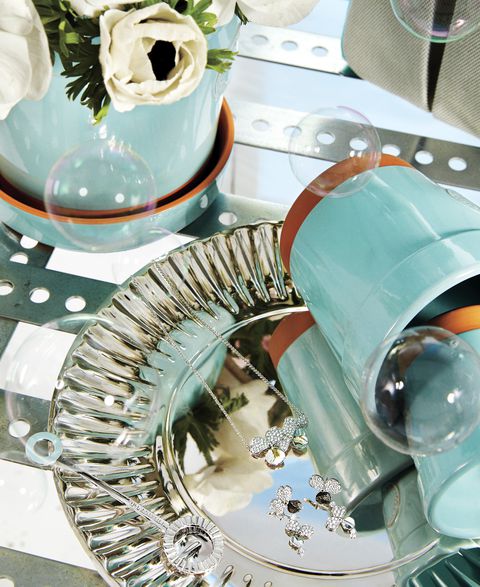 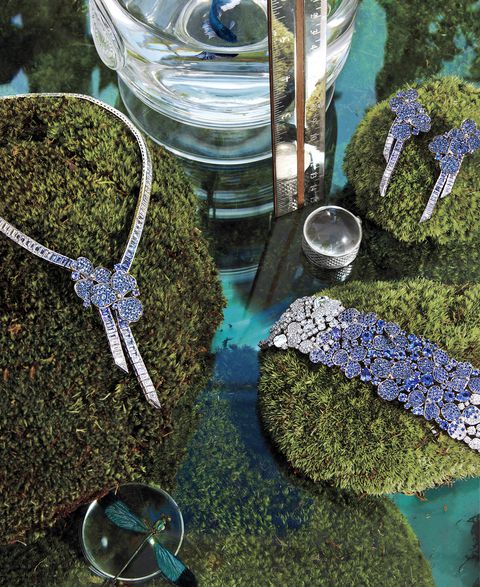 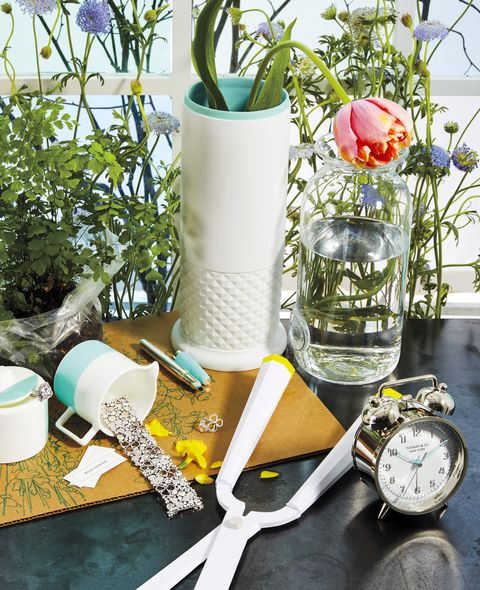 The point of departure was a watercolor rendering of an iris, dated 1881 and found in the company archives; iris, as it happens, is the central note of the Tiffany fragrance launched in September 2017. But Krakoff wasn’t looking for a literal representation. Instead, he says, he wanted to capture “the poetic idea of flowers.” He began making cutout shapes, crafting petals out of paper, and translating them into metal, riveting the petals together—“combining nature and an artisanal hand,” he says. Then came the coloration: blue and purple, from sapphires and tanzanite, a gemstone that Tiffany introduced to the world in 1968; and white and yellow, from the diamonds for which the company is famous. For contrast, the items incorporate mirror-polished pieces of platinum, which, Krakoff says, “people aren’t used to seeing because typically everything is pavéed and as diamond-encrusted as possible.” The result, he says, is “a tension between industrial and organic, between masculine and feminine.”

He is especially proud of the fact that the new collection runs the gamut from a bib necklace set with 68 carats of diamonds to openwork cocktail rings and pendants to wear with an evening gown or jeans and a T-shirt, with prices to match—unlike most high jewelry collections, positioned firmly in the stratosphere. Contrary to the age-old formula, in which ideas are born and expressed in their purest form at the top of the market and filter down into less expensive versions, Paper Flowers was conceived somewhere in the middle and then extended in both directions. The goal was to “recontextualize high jewelry in a more wearable, authentic way,” says Krakoff. “It felt like a better approach, as opposed to starting with high jewelry, which is a little paralyzing. Too often there’s a heaviness to the thinking behind it.”

As Krakoff talks about Tiffany, certain words keep recurring. “Desire” is one, Tiffany being in the business of “creating things that people fall in love with,” he says. This is, to his mind, one of the company’s chief responsibilities. “Dream” is another, as in “a place to dream”—his early impression of the store when, as a teenager accompanying his mother on a trip to New York from their home in suburban Connecticut, they stopped off at Tiffany’s fourth floor to look at table settings created by Vladimir Kagan, Angelo Donghia and other famous designers of the time.

Krakoff considers himself a custodian of Tiffany’s illustrious tradition, the latest in a brief line that reaches all the way back to the Art Nouveau master Louis Comfort Tiffany, acclaimed for his stained glass lamps and windows, a son of the store’s founder and Tiffany’s first official design director. Among Krakoff’s more recent predecessors was John Loring, Tiffany’s revered design director emeritus who retired in 2009 after holding the position for three decades. During his tenure, Loring authored 21 books for Tiffany, educating consumers about diamonds, pearls, and watches; dispensing advice on setting a table, throwing a party, planning a wedding; and defining good taste by his example. It was, Krakoff says, “a more prescriptive time. I think people were interested in being informed and guided. Today it’s entirely different. It’s very much about my version of this brand—it’s my interpretation.” He feels “a real responsibility to deliver something that’s worthy,” creating products showcased on a virtual stage vying 24/7 for the limited attention of a global audience. 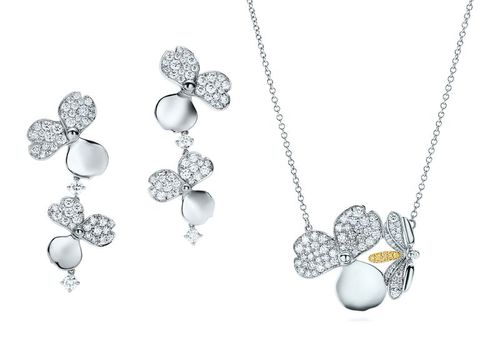 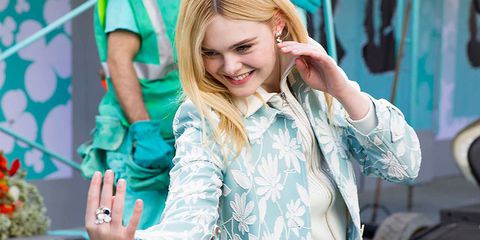 If Hermès owns orange, Tiffany owns robin’s-egg blue. The blue box figures prominently in the brand’s iconography—Krakoff calls it “magical.” Many of the products he has created over the past year are rendered in that particular shade, now with its own Pantone designation. Blue luggage, blue leather interoffice envelopes, blue-and-white color-block wallets and jewelry cases, terra-cotta flowerpots glazed blue, and an hourglass with blue sand advertise their pedigree by means of the color.

Rather than compete with other luxury houses, especially European brands famous for conferring a certain prestige, Krakoff prefers to emphasize the things that set Tiffany apart: a pragmatic attitude toward luxury, apparent in products that do everyday duty in our lives; and a modernist simplicity at the heart of the company’s style. “The most defining thing about Tiffany is probably the six-prong setting for a diamond,” he says of founder Charles Lewis Tiffany’s technical innovation from 1886. “And that came out of a functional design rather than a decorative design; it was set on six prongs so that more light passed through it. The most American thing you can say about design is that form follows function. The beauty is in the execution.”

Of all the words that recur as Krakoff talks about Tiffany’s particular breed of American luxury, “openness” comes up most often. Openness to materials (sterling silver for jewelry), to the objects it sells (a coffee can repurposed as a vase). But also a new, democratic embrace of a broad clientele. Not so long ago, Tiffany’s advertising campaigns featured young Park Avenue couples—the woman in an evening gown, the man in a tuxedo—moments before he popped the question. It was a reliable fantasy, still glamorous albeit increasingly remote. Now the bridal department has been renamed “Love & Engagement,” and the fantasy is of a world grounded in reality.

This one is surely the most conspicuous, and though the start of the company’s move to project an image that’s more inclusive predated Krakoff’s arrival, it has picked up steam under his direction. Taking the place of the fairy-tale protagonists leading a life of privilege to which they were born and the rest of us could only aspire a new cast of characters now appears: unconventional celebrities—Zoë Kravitz, St. Vincent, Janelle Monáe—leading lives of privilege of a different kind. Wedding rings are featured on the hands of tattooed couples, same-sex couples, telling a different, though no less American, story. For details visit www.tiffany.com