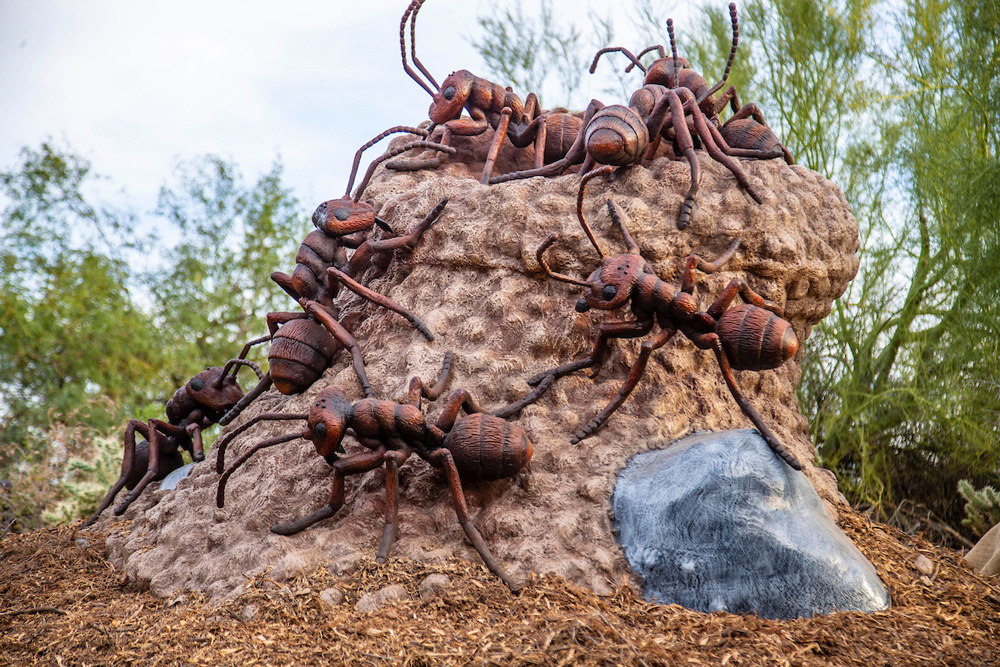 Above: Black Garden Ants can recognize fellow colony members and will even take great risks to help a friend in trouble.

Beautifully detailed, the bugs are constructed from a combination of steel, fiberglass and skin material made from a special  urethane compound that protects them against sun, rain and snow, making them perfect to display in their natural environment. Like the past dinosaurs exhibition, the realistic movements on the bugs are powered by a pneumatic system that enables smoother and finer movements.

Insects make up nearly 80-percent of all animal species on Earth. Without them, life would be remarkably different. Bugs – insects, arachnid and other arthropods and their kin – play a major role in the natural ecosystem through pollination, recycling of plant material and their function in the food web. 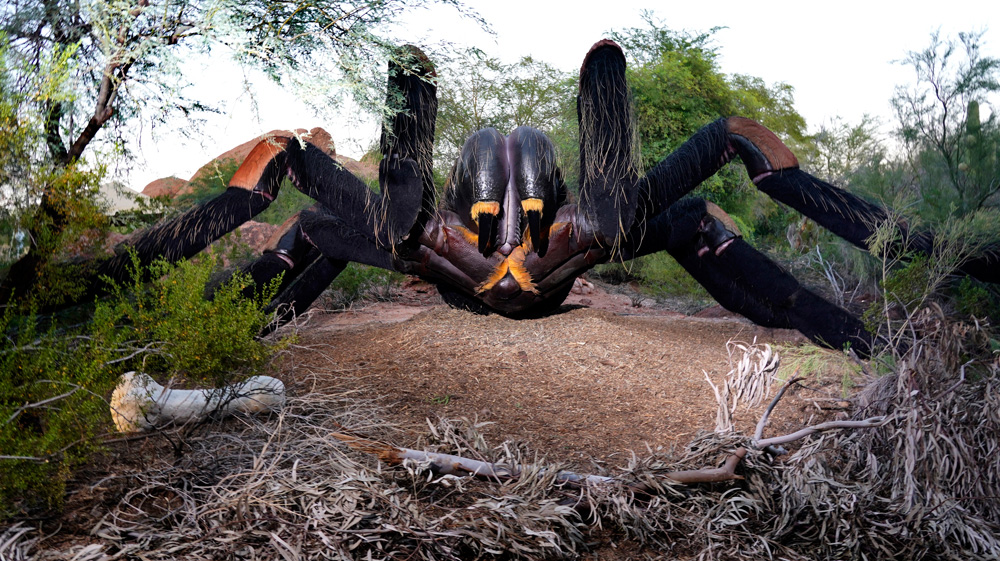 Above: The Mexican Red-Knee Tarantula can kick a cloud of irritating hairs into the skin, eyes and mouth of its assailant.

“Insects are key components of biological communities and play numerous, critically important roles,” says Drew Foster, animal curator for the Phoenix Zoo. “They contribute greatly to nutrient cycling, the trophic web, as both predator and prey, and successful reproduction of flora through pollination, a process crucial to all life as we know it. The survival of most plant and animal species truly depends upon insects, either directly or indirectly.” 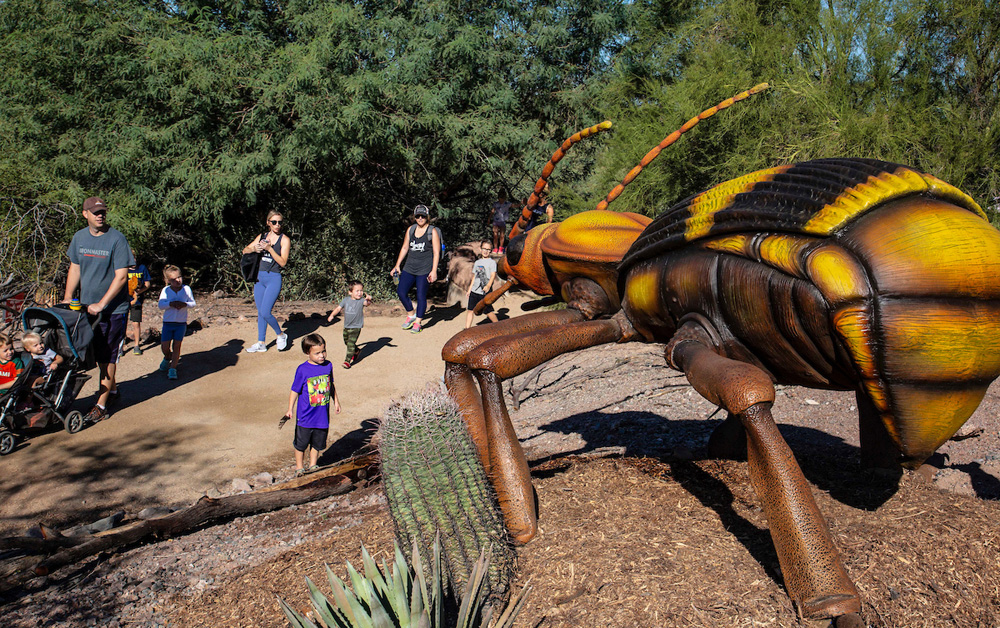 Here are fun facts about some of the bugs visitors will encounter;

BLACK GARDEN ANTS harness the power of teamwork. Colonies as big as 10,000 ants will work together to care for young, protect food sources and build elaborate nests. They can recognize fellow colony members and will even take great risks to help a friend in trouble. Many ant species are important ecosystem engineers. By digging nests and taking food underground, they invigorate the soil with oxygen and nutrients, improving the environment for other species.

The BLUE-EYED DARNER DRAGONFLY has unmatched aerial agility. Like a highly advanced drone, it can fly backwards, change directions in a flash and hover for over a minute. With a 95 percent success rate, dragon-flies are among the world’s best mosquito hunters. Their flying skills have even inspired new innovations in drone technology.

Don’t mess with a BOMBARDIER BEETLE! When threatened, it shoots a blast of noxious, boiling chemicals out of its rear abdomen. The bombardier beetle’s explosive defense mechanism has inspired new technological designs for fire extinguishers, medical inhalers and car fuel injection systems.

The advanced weaponry of the EMPEROR SCORPION includes powerful pincers and a venomous stinger — excellent tools for subduing prey and discouraging predators. Recent research shows that emperor scorpion venom has anti-malarial and anti-bacterial qualities and may be useful in the treatment of heart disease. 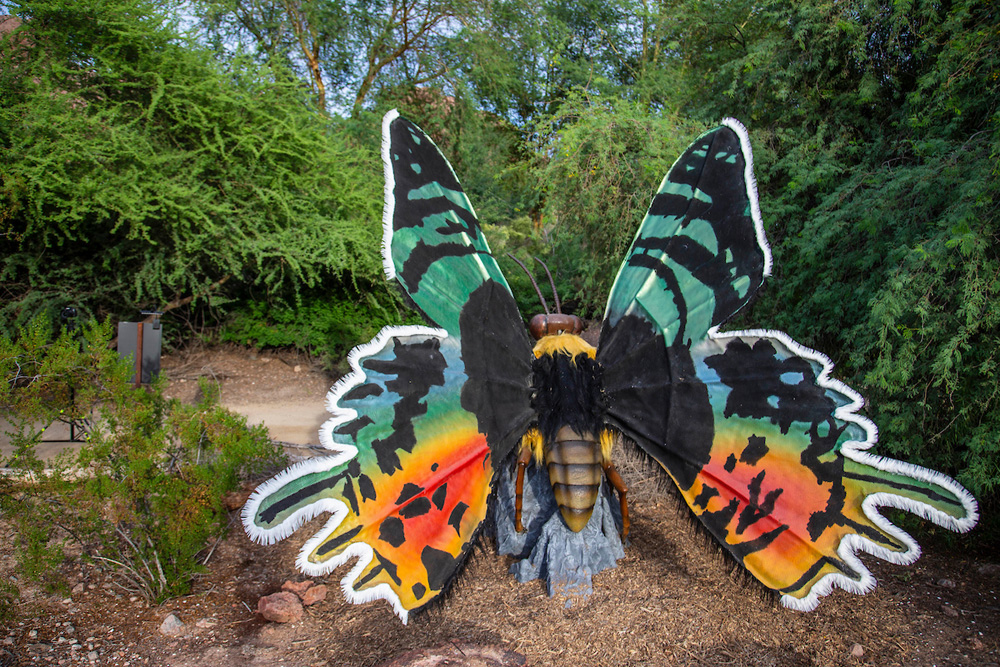 Above: The Madagascan Sunset Moth’s stunning color warns potential predators that it is toxic and should be left alone.

A GRASSHOPPER can jump several feet to avoid being caught by a predator. This is the equivalent of a human jumping the length of a football field. Grasshoppers play an important role in the food chain by eating plants and preventing overgrowth, fertilizing the soil and providing food for many species, including humans.

The MADAGASCAN SUNSET MOTH’s stunning color warns potential predators that it is toxic and should be left alone. This moth is an important pollinator of a variety of rare plants found only in Madagascar.

The MEXICAN RED-KNEE TARANTULA has an abdomen covered in tiny, barbed hairs. Should trouble arise, it can kick a cloud of irritating hairs into the skin, eyes and mouth of its assailant. Tarantulas are predators of insects and prey to many birds, reptiles, mammals and even some wasps. It is a keystone species on which others depend. If it were to disappear, its ecosystem would change drastically.

The SPICEBUSH SWALLOWTAIL CATERPILLAR  is a master mimic. Displaying snake-like markings, it will rear up as if to strike and stick out an imitation tongue to discourage predators. The adults and larvae serve as a food source for dragonflies, birds and spiders, and adults are pollinators of plant species such as bee balm, honeysuckle and clover.

Above: Few animals are as crucial to maintaining healthy ecosystems as the Red-Tailed Bumble Bees.

RED-TAILED BUMBLE BEES have the power of “buzz pollination.” By contracting their flight muscles hundreds of times per second without moving their wings, they create a forceful vibration that causes flowers to release their pollen. Few animals are as crucial to maintaining healthy ecosystems as bees. For many plant species, bees and butterflies are the only pollinators.

SAY’S FIREFLIES can “glow in the dark” thanks to a chemical reaction called bioluminescence. This ability to produce flashes of light is used in communication, courtship and to attract prey. Fireflies create light with luciferin and luciferase, two rare chemicals used in the treatment of cancer, multiple sclerosis, cystic fibrosis, heart disease and more.

The SEVEN SPOT LADYBIRD BEETLE can smell fear. When hunting aphids, its favorite food, it finds them by sensing a chemical that the aphids release to warn each other of predators. Highly adaptable, the ladybird beetle has been introduced to many areas outside its native region to help reduce aphid numbers.

STAG BEETLES are awesome recyclers. By eating and excreting decaying wood and leaves, they play an important role in maintaining the soil quality and overall health of their habitats. The male stag beetle’s huge mandibles are used in violent battles against other males, with the winner winning the female. They are also good for intimidating potential predators.