SPRING JEWELRY TRENDS
From statement brooches to reimagined pearls, these
bold styles will bring fresh energy to your look this season.
Text by Fiona Clarke

As we emerge from a challenging winter and look forward to the warmer, brighter spring days, many of us are eager to embrace more joyful forms of glamour. It’s no wonder then that the jewelry world is gravitating toward pieces that signify exuberance and joie de vivre while offering plenty of opportunities to cultivate individual style. Here, we look at five key trends that offer a happy dose of optimism and encourage bolder forms of self-expression as we welcome the new season. 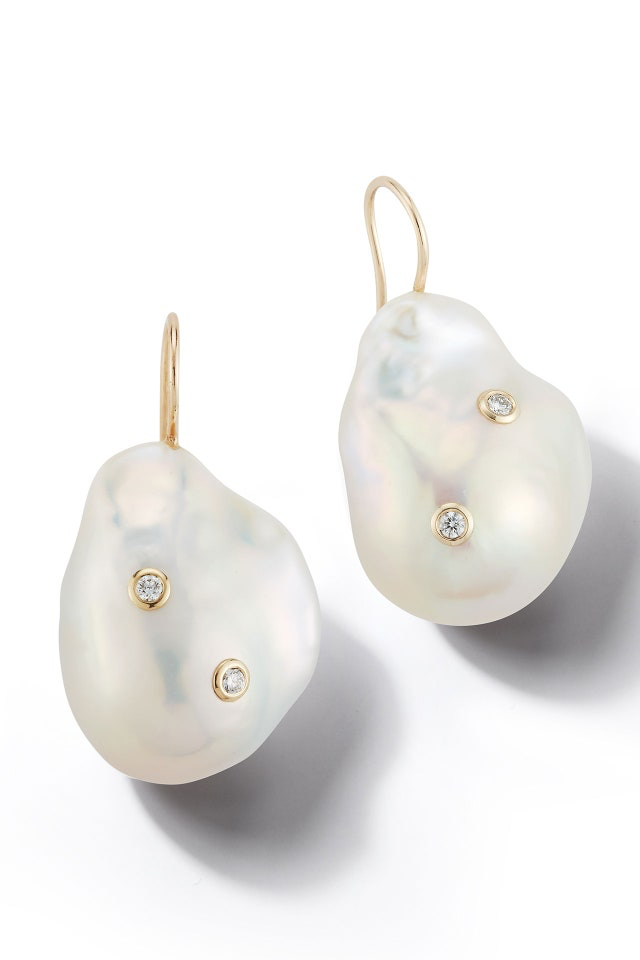 Historically, pearls whisper demure elegance, but they can just as easily scream punk decadence or hint at coquettish refinement à la Coco Chanel, who rarely left home without them. Their versatility suits them for creative reinvention when it comes to springtime accessorizing. Go for designs with a modern twist, like the lustrous, innovative styles of Mizuki, Mateo and Lia Di Gregorio, who are among the designers responsible for the edgy rebirth of this natural gemstone.

Left: A pair of South Sea pearl earrings embellished with diamonds by Mizuki.

Popularized in the ‘80s and ’90s by supermodels and hip-hop stars, chunky chains are back. This time, though, they’re less about excess and more about seductive casualness, inspired by the jet-set glamour of the ’60s and ’70s. For a reference, see Sophia Loren, who has been skillfully sporting this style for decades.

In fact, Italy is a good place to start. The Milanese jewelry house Pomelatto has been purveying bold gold chains — their thick links often punctuated with precious gems — for more than 50 years. Buccellati takes a textured approach, as in its woven link necklaces, whose delicate braided effect is a house signature. 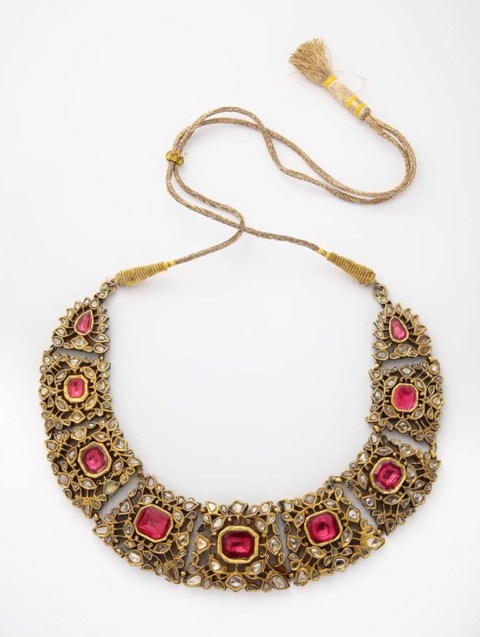 Set with diamonds, rubies, emeralds, sapphires and jade, these kaleidoscopic jewels were originally made for members of the Mughal dynasty that ruled the Indian subcontinent for more than three centuries. The regal style, still beautifully executed by modern Indian goldsmiths, had a significant influence on Western arts and crafts in the early 20th century. Cartier’s famous Tutti Frutti designs, icons of the Art Deco era, for example, feature rubies, emeralds and sapphires carved in the Mughal mode.

Today, brands like Amrapali and Sutra (although based in Houston, each piece is handcrafted in Mumbai) and Meghna Jewels are reinterpreting Mughal motifs, including florals and paisley patterns, and employing traditional techniques, such as enameling and kundan (a highly refined form of molten gold) gem setting, with e ye-catching results.

Brooches are back on the radar thanks to fashion houses like Gucci, Versace, Dior and Saint Laurent, all of which feature fun “pinable” designs in their current collections. Chanel, of course, has never abandoned this style, producing gorgeously baroque CC examples since the 1980s.

To qualify as statement making, a brooch should be well crafted and an obvious talking point. The giant golden Schiaparelli dove pin Lady Gaga wore at the inauguration of President Joe Biden certainly started conversations among jewelry fans.

Whether a dazzlingly naturalistic Art Nouveau dragonfly, a whimsical David Webb animal a gem-studded bloom or a streamlined abstract design, these jewels add color and sparkle to your look and a spring to your step.

Rught: This Fleur-de-Lis Brooch by David Webb has an oval-cut sapphire surrounded by  brilliant-cut and yellow diamonds set in 18k gold and platinum. 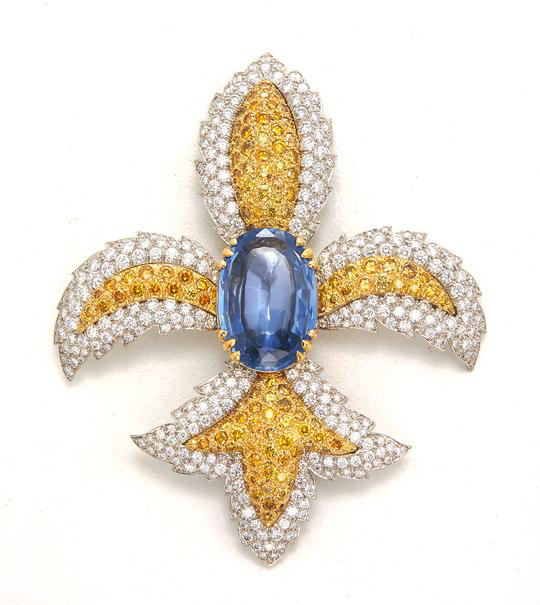 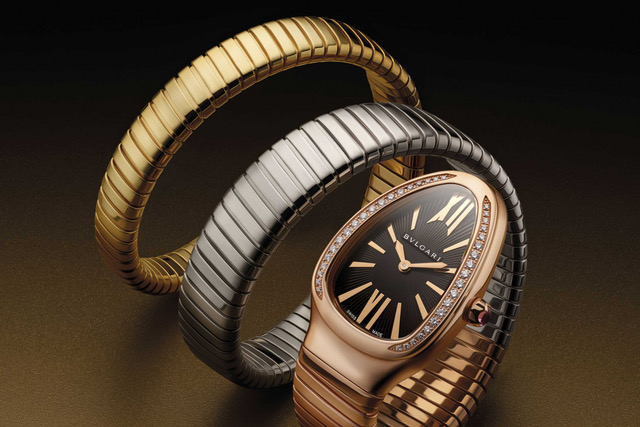 Pieces from grandes maisons like Van Cleef & Arpels, Cartier, Bulgari and Tiffany & Co. immerse us in the romance of their houses’ rich history. Their enduring designs are icons, adorning generations of jewelry lovers. High on the hit list are collections by Bulgari. The legendary jeweler specializes in heirloom pieces, each imaginatively informed by the architecture and mythology of Rome, where it was founded in 1884. Its coveted B.zero1 rings are inspired by the Colosseum, while its Serpenti pieces, with their sinuous body-hugging shapes, invoke the snake as protective Roman deity and symbol of good fortune.

For another lucky charm, look no further than the Van Cleef & Arpels Alhambra collection. Its four-leaf clover, or trèfle, symbol appears on everything from sautoirs (the French term for a long necklace that suspends a tassel or other ornament) to simple drop earrings and cocktail rings. The only challenge is choosing your gem. Over the years, Alhambra pieces have been made with diamonds, onyx, mother-of-pearl, lapis lazuli, turquoise and the 1970s favorite tiger’s-eye, among many other stones.