August is often a quiet month for publishers, but this year there’s a lot to look forward to: new books from Akwaeke Emezi and Daisy Johnson; a timely re-examination of William Faulkner, with a special focus on how he wrote about race; an astrophysicist’s soothing guide to the end of the universe as we know it; and a biography of the drug kingpin El Chapo. 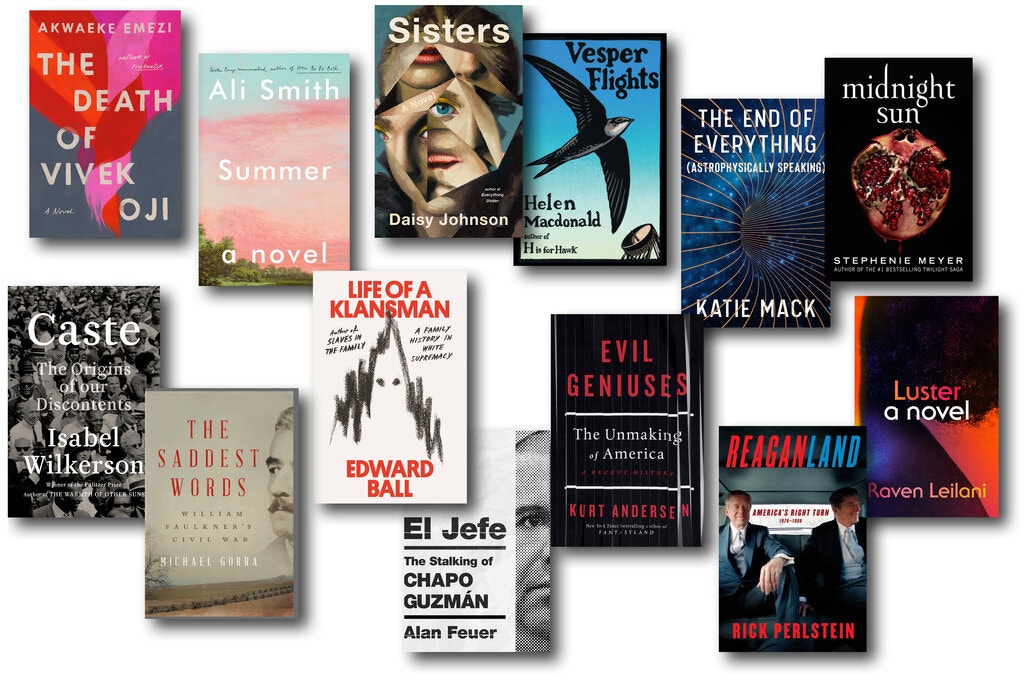 The Origins of Our Discontents by Isabel Wilkerson

Wilkerson, the Pulitzer Prize-winning journalist and author of The Warmth of Other Suns, places America’s racism in a global context, linking it to the caste system in India as well as Nazi ideology. She identifies eight cornerstones of caste systems throughout history and uses vignettes from real-life people to illustrate how inequality acts as an invisible, but deeply felt, blueprint for their lives. Available August 4

By 1976, Ronald Reagan’s political career appeared to be over. In Perlstein’s new book, the final volume of his series charting the ascendancy of the right in America, he traces Reagan’s political comeback and how he reinvigorated the Republican Party’s base with his pledge to “Make America Great Again.” Perlstein, an engaging storyteller, offers a clear guide to the intellectual and ideological debates of the time. Available August 18

El Jefe: The Stalking of Chapo Guzmán by Alan Feuer

El Chapo, the most famous drug trafficker of his generation, received a life sentence last year. He had evaded the Mexican authorities for years, smuggled hundreds of tons of drugs and became notorious for his violence and corruption. Feuer, a Metro reporter for The New York Times who covered El Chapo’s trial, gives a brisk, rich account of the kingpin’s rise to power and his downfall. Available August 25

The End of Everything (Astrophysically Speaking) by Katie Mack

“In about five billion years, the Sun will swell to its red giant phase, engulf the orbit of Mercury and perhaps Venus, and leave the Earth a charred, lifeless, magma-covered rock.” That’s how Mack, a theoretical astrophysicist, begins her engrossing, elegant timeline of the cosmos. Despite the book’s sobering title, she sprinkles in delightful esoterica along the way, while providing a guide to the most plausible scenarios about the end of the universe. Available August 4

Evil Geniuses: The Unmaking of America by Kurt Andersen

Starting in the 1970s, according to Andersen, a “cultural U-turn” caused the nation to abandon the middle class, instead rewarding corporate interests and capitalist greed. The United States, he writes, might be “the first large modern society to go from fully developed to failing.” But for all his grim assessments, he offers solutions (including stronger unions and a universal basic income), and believes change is possible — so long as the left adopts tactics the right used decades ago. Available August 11

The Death of Vivek Oji by Akwaeke Emezi

A family in southeastern Nigeria confronts what little it knew of — and was willing to accept about — its son after his body is delivered to his mother’s doorstep. This mystery, by the author of Freshwater and Pet, raises an unsettling question: How does a family mourn a young man who was forced to hide his true self? Available August 4

Edie, a Black woman in her 20s, is an artist in Bushwick who is unfulfilled by virtually every part of her life. When she begins dating a white man in an open marriage, she becomes entangled in his family’s life — emotionally, physically and even economically. Available August 4

It’s been almost 15 years since Meyer published Twilight, the best-selling young-adult vampire novel that sparked a worldwide interest in paranormal romance. Now she returns to the story of Edward Cullen and Bella Swan, but this time, she tells it from his point of view. Available August 4

Faulkner’s enduring, ubiquitous quote that “the past is never dead” might be a fitting epitaph for this new book. In this timely re-examination, Gorra considers how Faulkner should be read in the 21st century, with a focus on the depiction of Black people and racism in his fiction. Available August 25

The final volume in Smith’s seasonal quartet, set during the coronavirus pandemic, centers on Sacha and Robert, two siblings grappling with the awakening of their political and cultural consciousness. As she did in the series’ earlier books, Smith balances timely real-life issues with her characters’ inner lives and characters from the previous books reappear. Available August  25

Macdonald’s debut, H is for Hawk— about grappling with the death of her beloved father by training a goshawk — was one of The New York Times Book Review’s 10 best books of 2015.  Now, Macdonald returns with a collection of essays, new and previously published, about the natural world. Available August 25

Life of a Klansman: A Family in White Supremacy by Edward Ball

In his National Book Award-winning book Slaves in the Family, Ball tracked down descendants of the people that his ancestors, plantation owners in South Carolina, had enslaved. Now, he returns again to his family, focusing on one of his great-great-grandfathers and his association with the Ku Klux Klan. Available August 4

With her debut novel Everything Under,  Johnson became the youngest author shortlisted for the Booker Prize. Her new book focuses on two teenage sisters, July and September, who arrive with their mother at a desolate house on the eastern coast of England after leaving school for reasons that aren’t entirely clear. The sisters are fiercely close, less than a year apart in age, but their relationship takes on a sinister tone over time. As their circumstances and past come into focus, Johnson delivers a shocking twist. Available August 25